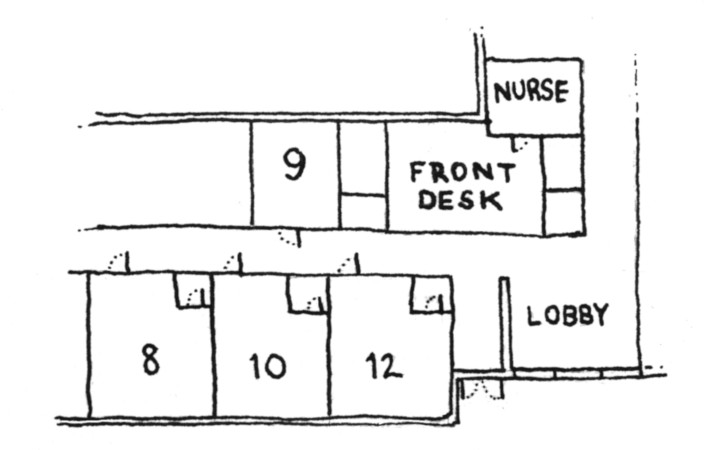 The shooter dressed in black: a black polo shirt over a black t-shirt, black cargo pants, black shoes, black fingerless gloves on his hands, and a black boonie hat on his head. Over this, he put on a green Eddie Bauer vest. He had a “drop” holster strapped to his thigh, with a Glock 20 pistol in it. He put the 9mm Sig Sauer pistol in the left-front pocket of his trousers.

In the lower-right pocket, there were two 30-round magazines for the AR-15.

The lower-left pocket was empty, when found. But it’s evident that there were two more AR-15 magazines in it, when he left the house.

In the back pockets of his pants, he had four 15-round magazines for the Glock.

The left cargo pocket of his pants held a single round of 5.56, for the AR-15. In the right cargo pocket, he put one shotgun shell. Likely, these were fail-safes, in case he ran out of ammunition before the last shot. He also carried four more 30-round magazines for the AR-15 on his person; presumably, two in each cargo pocket.

He left his home on Yogananda Street shortly after 9:00am, driving a black 2010 Honda civic. It was his car, but it belonged to his mother on paper. He closed the garage door behind him, and followed the route he had driven before. At the “T” intersection, he turned right, and then right again. This brought him up Dickenson drive, to his old elementary school. He parked in the fire lane — along the front curb, but just outside of the view from the school’s front desk.

It was a clear, bright day, so he likely had his Cocoon sunglasses on for the drive. They would be found in the Honda’s console. He left the Saiga shotgun in the back seat, along with two extra magazines, each holding ten 12-gauge shotgun shells. (For some reason, he had decided to leave the drum magazines for it at home.)

Getting out of the car, he dropped two black, hooded sweatshirts on the pavement. He was probably wearing one for the drive. And he always kept a spare in the car.

He inserted earplugs, and approached the entrance of his old elementary school. He pulled back the charging handle on the AR-15 — ejecting a single live round onto the pavement, and giving him certainty that the magazine was inserted properly. The 30-round mag had another just like itself, duct-taped to it upside-down.

School had started at 9:05 am; it was now just after 9:30 am, which meant that the front entrance was locked. He knew that, because he had visited the the school’s website recently. Multiple times.

He came to a halt in front of the full-length glass window, immediately next to the school’s entrance. Aiming across the small landscape area where the school’s flagpole stood, he pulled the trigger on his Bushmaster:

He had arrayed the shots in a circle, blasting a hole in the glass. Inside the school, the bullets struck a display case, and some artwork hanging on the tiled walls.

The school’s secretary was at the front desk. She looked up, and saw a man with a rifle coming through a hole in the glass. She ducked down, taking cover behind her desk, and frantically pawed for the phone.

The shooter pushed some furniture out the way as he passed through the small lobby of the school. Immediately to the left of the front desk was Room 9, where a Planning and Placement Team meeting had been in session. Suddenly the door opened, and the school’s principal emerged, telling others behind her to, “Stay put!” Nonetheless, she was followed by the school’s psychiatrist, and the lead teacher.

It appears the shooter was about to enter the front desk area when he saw them coming down the hall on his left. He turned, and aimed.

The shooter turned back to the front office, and opened the door. He may have been looking for the secretary; she was still hiding behind her desk.

In the next room, the school nurse was hiding behind her own desk; through the gap, she saw the shooter’s black shoes enter the room, pause for a moment, and then leave again. He shut the door behind him.

The shooter came back out of the office, into the hall. He may have noticed that there was one less casualty lying in the hallway now — the lead teacher had been hit in the foot, played dead for a few seconds, and then crawled back into the conference room and shut the door. If he did notice, he didn’t follow her.

The closest classroom to the entrance of the school was Room 12, immediately on the left. But he walked right past it; there was piece of dark-colored paper covering the door’s circular glass pane from the inside, left behind by accident after a lockdown drill. Uncertainty over who or what was on the other side of this door may have been the only reason he didn’t open it.

The next door on his left was Room 10, and its window was not fully covered. Inside, there was a first grade class, and two teachers, still reacting to the sounds in the hall. One of them was a personal aid. She grabbed her student, and tried to shield him.

The shooter opened the door to Room 10. He aimed for the teachers first.

Some witnesses from Room 10 would tell police that the man with the gun became angry suddenly. Likely, it was because he had forgotten to reload before entering a room, when his clip was almost empty. The very thing his video games had trained him to never do, and he did it first thing — then threw a tantrum over it.

One of the students, seeing this, shouted “run!” and a handful of his classmates listened — escaping out the front entrance, and running down Dickenson Drive toward the firehouse.

The shooter’s plan was falling apart. He ejected the duct-taped magazine, flipped it over, inserted the second magazine, and pulled back the charging handle, ejecting another live round. Not everyone had escaped room 10, and the distance was nil.

Gun smoke was beginning to fill the air.

With his earplugs in, the shooter might not have heard it, but in between his volleys of gunfire, the school was filled with the singular sound of a woman sobbing — the secretary he had walked right past at the front desk had, apparently, in her panic, hit the “intercom” button. Now her static-y, muffled pleas were being broadcast in every room and every hall, as the classrooms went about their lockdown procedures, over the sound of gunfire.

The shooter ejected the double-magazine onto the floor of Room 10, inserted a new one from his pocket, and ejected a live round. He left Room 10, going back into the hallway.

At some point during his trips through this hallway, it appears he wanted to be certain that the Glock would work — he knew he would need it soon. He drew it from the holster, and fired one shot, into the door frame of Conference Room 9. It worked, but the handgun’s legendary kickback, combined with his limp wrist, kept the next round from cycling into the chamber. And he would have had to drop the AR-15 to fix the jam — at some point, the sling on his rifle had broken.

He dropped the Glock back in the holster. He did not enter the Conference Room (which still contained the wounded teacher, and several of her colleagues).

He turned back down the hall, to the third door on his left. Room 8. Another first grade class. He opened the door. It was not locked.

Inside, the two teachers (one of them was a substitute; whether or not she had been made aware of lockdown procedures, or given keys to lock the door, would be a matter of some dispute) had been trying to fit their entire class of students into the bathroom, a space of only 16 square feet. And the door’s hinge swung into the bathroom, not out, making the task even more daunting.

Ballistics evidence suggests the group had not quite gotten the door closed, at the moment the shooter came around the corner. They were powerless. He couldn’t miss.

He ejected the spent 30-round magazine, and loaded another from his left vest pocket, once again ejecting a single live round.

He ejected the magazine, with 13 rounds still in it. The gun might have jammed. He loaded another 30-round magazine.

The gun stopped firing, again. It had likely overheated; a white powder, from all the shattered bathroom tile and cinder blocks, was already baking into a film on the outside of the hot compensator. He ejected the magazine, and loaded yet another.

The gun stopped working again. At any rate, he had accomplished what he wanted in Room 8.

The shooter emerged back into the hallway, pulling back on the Bushmaster’s charge handle — trying to get the poorly-maintained weapon to cycle, and ejecting four more live rounds in the process. He gave up, and dumped the magazine in the hallway, with 11 rounds still in it. He took another magazine from his pocket, and loaded it.

He might have lost track of which rooms he had already entered, because he went back into Room 10. About six minutes had passed since he first crawled through the glass; by now, he could hear police sirens, as Newtown Police Department squad cars were pulling up outside. He might even have seen them through the window, running toward the school. He aimed out at the parking lot.

He stopped firing, or the gun stopped working. Finally, he dropped the AR-15 on the floor — still with a round in the chamber, and fourteen more in the magazine.

The shooter drew the Glock from its holster, still jammed from the test-fire. He started racking the slide back, ejecting one, two, three, four rounds onto the floor of Room 10, trying to get some degree of certainty that the last shot, the most important one, wouldn’t fail. The police were practically at the door.

He put the barrel of the Glock to the back-right of his head, aiming upward, and pulled the trigger.